John Burningham's Little Book Series: 'and he peed on the flowers' 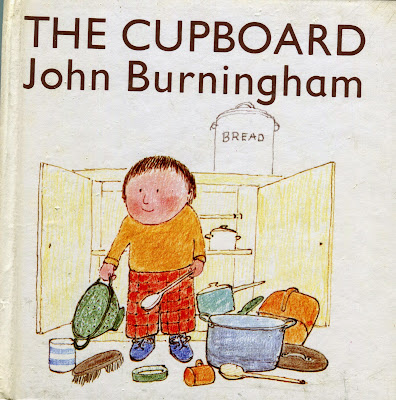 Originally published in 1974 and 1975 but, though reprinted several times since, currently out of print -for a good few years now-, this fantastic series of great Little Books -just that- by John Burningham is both a childhood memory and an adult 'wow-how-simple-yet-how-incredibly-difficult-to-do-just-right' realisation.

Each of these little books has 9 double spreads, with text on the left and an illustration on the right, plus an inside cover and an inside back cover. That's it. The number of words in each one ranges from 27 (The School) to 65 (The Blanket). In these few words and few pages, Burningham remarkably manages to fit in the story of an experience from the child's point of view: an experience -often a first experience- with a beginning, a middle and an end, and with room for the character to develop somewhere between the first page and the last.

Burningham himself writes about these 'first experience' books in his autobiography John Burningham (Johnathan Cape, 2009):

'If you have small children, you observe them. You know other people with small children and take note of that world. When my daughter Lucy was about two she used to wake incredibly early in the morning as most small children do. There was a programme on the radio called, 'Make Yourself at Home', which was broadcast for immigrants from the Indian continent to learn English. The programme used to start with a bit of Indian music. On this day, Lucy suddenly did the dance movements with her arms. It was extraordinary to see because it was instinctive.'

These books speak from a child's viewpoint and talk straight to the child reader in a way very few children's books do. They are the result of much watching the way children watch, experience and understand the world they live in.

The world of The Little Books series is one where adults give contradictory messages, exciting experiences often come with danger or mishaps, babies are suddenly brought into the house and are there to stay, or the neighbour's dog visits for the day -and pees on the flowers.

The first in the series is The School , the shortest and perhaps simplest of them all. 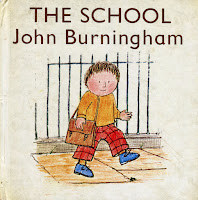 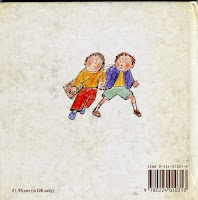 Most of the pictures are frontal almost as if profiles hadn't been invented yet, mimicking actual drawings of children at this age. In many of them, the boy stares out from the page, and tells us all about it.

One of the things I like best about these Little Books is how they manage to convey a young child's sense of time, whereby a day can be satisfactorily and completely condensed in 27 words.

The next is The Snow. 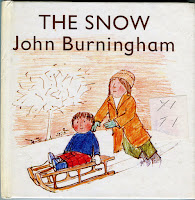 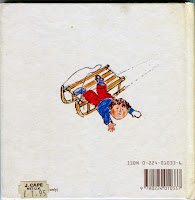 The mimicking is not only in the superb drawings but also in the text, which mirrors exactly the way a kid might tell you about the day it snowed. The story manages to combine the excitement of a first day of snow, the pride and satisfaction of having made something, the joy of playing with Mummy, the accident and the feeling of pain and disappointment that comes with it, AND the lost glove AND the cold. But soon it's all fixed by going indoors. The day has been intense, with fun and with tears. And wouldn't it just be wonderful if we did it all again tomorrow?

The sense of time I mentioned in The School now includes the future. Please let's have another today tomorrow. AKA the famous 'Again! Again!'.

In The Baby, the baby doesn't have a name or a gender: 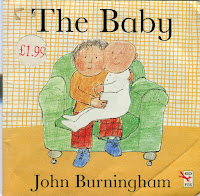 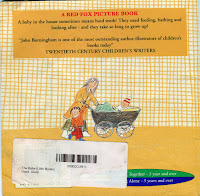 The ambivalence towards a new arrival in the house is conveyed through the observant eyes of the older child: 'What on earth is this thing?'. And then eventually, somwhere, an intuitive understanding that one day this thing will be rather like him.

The Rabbit tells the experience of getting a first pet: 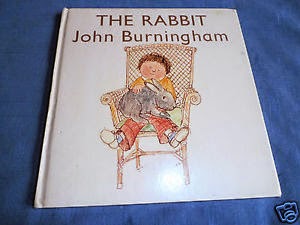 I used to love this one when I was a kid. I'm pretty sure I learnt the word 'dandelion' from this book. I wanted to stroke the rabbit, I also wanted the rabbit to stay, and I also wanted to have fun catching him and returning him to his hutch.

With this Little Series of Book, if the child reading them or having them read to happens to have lived the experience in particular, they feel identified. If they haven't, they might feel like they'd like to. I didn't have a pet as a young child and I remember feeling what it was like to have a pet when looking at this book. The combination of observation of the rabbit as a foreign creature and the relationship of the child and the rabbit brings the experience to life for the reader. And it seems so simple!

In The Dog, the boy experiences having a dog for a day. 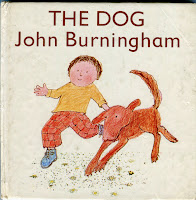 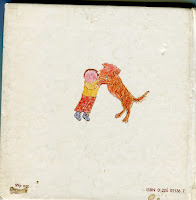 One of the pages in this book 'provoked a furore from parents, teachers, booksellers, librarians and the press', according to Burningham's account in John Burningham (Johnathan Cape, 2009).

'And he peed on the flowers'.

One parent wrote:
'Recently my four year old son was given one of your books for his birthday. It was called the Dog by John Burningham. On looking at the book we were absolutelly disgusted at the contents of page 12 and 13. What a thing to put in a child's book. I shouldn't have thought you would have printed such crudeness. What worries my husband and I is if this is what you put in the story of the dog whatever do you put in the story of the rabbits?'

The Dog was withdrawn from some libraries and schools were put under pressure from parents. A bookshop owner in Devon demanded to be credited by my publisher for a book returned by an indignant customer. A library found the offending pages had been ripped out. And Mary Whitehouse was quoted in the Worthing Gazette saying: 'I think this section of the book which is aimed at four to five year olds is supremely unnecessary'.

But I was damned if I was going to change the word to some childish euphemism. I had used correct English.
pee, v.i. to urinate- also n. [For piss]'

We love it: a child delightedly watching a dog in an unknown house break all the rules. He eats the cat's dinner, pees on the flowers, grabs Daddy's shoe, before the realisation that it might be a good idea to put him on his lead. And again: more tomorrow? Yes, please!

The Cupboard is one of my favourite ones, and my son's too. 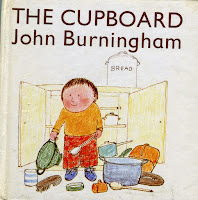 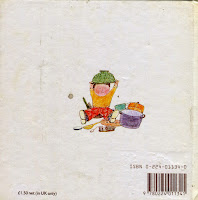 I love the way the boy recounts the mother's contradictory orders in a completely matter-of-fact way and the appropiation of the entire contents of a house as toys.

The Blanket is the dramatic story of the loss of a blankie just before bedtime. 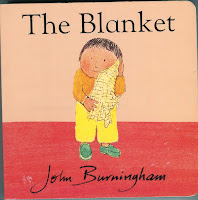 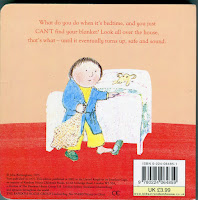 I never was a blankie girl myself, but my son is certainly a Teddy boy and oh the dramas we have experienced. Once we even left Teddy behind when we went on holiday! And he wasn't under the pillow.

In this story we love the almost army-like search expedition, not once, twice round, until he finally finds it himself-exactly where it should be.

And the last story in the series, The Friend tells the story of a boy and his best friend, Arthur. 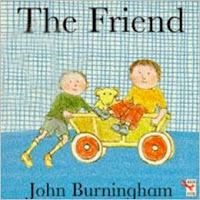 Arthur is my friend / We always play together / We play outside when it is nice / and stay inside when it is raining / Sometimes I don't like Arthur / so Arthur goes home / Then I'm by myself / I have other friends, of course / But Arthur is my best friend.

This onw reminds me of another favourite of ours on the subject of friendship: Janice May Udry and Maurice Sendak's Let's be Enemies. But the way Burningham manages to fit in a similar line of development in this number of pages and words is just stunning.

Illustrations
Not at all like the illlustrations in Borka, Trubloff, or Canonball Simp and other similar early work, though somewhat closer to the style of Mr. Gumpy, the simple line drawings on white backgrounds in these Little Books are absolutely fantastic in their simplicity and in their mirroring of actual children's drawings -especially in the faces-. Two dots a hook line for a nose and a line for the mouth is all Burningham needs to bring the character to life. The somewhat rigid, forward facing drawings of the boy are brought to life by the tremendous amount of action on the pages. Something is happening on every page and in this sense they are great to look at again and again.

Read-aloud and read-alone
Written in first person, these books are perfect for older kids who are learning to read to give them a go when they are ready. The use of the first person is great for children of this age to make these books their own.

But these are also books to be read out loud to much younger children. Although the texts are very short, they seem to spark the 'Again! Again! Again! reaction every time with very little ones.

What I like about these Little Books
I like that John Burningham never tries to fit a lesson in while he's at it. I like that they are written from the child's point of view and speak directly to the child. One can hardly feel the adult presence, except as another element for the child to react to and bear in mind. I like that they boy is not naughty or good, just a kid trying to navigate life and the world and making a more or less decent job of it. I like that the parents only appear as background characters,  if they appear at all, letting the child lead his life, make mistakes and handle the mistakes he makes. I love how the author-illustrator's perceptive observation seeps through every page without us hearing him and without him getting in the way. Having done a fair share of observing, Burningham creates this character and then feeds him seven experiences, steps back and lets the character react and speak and tell us all about it.

These books are a set of little masterpieces that should be released again and then be kept in print for a long, long time.

(c) of all the illustrations in this post, John Burningham.

(c) of the text, Ellen Duthie. You may copy this or reproduce it, but please be nice and credit the author and the site.
Posted by E. Duthie at 00:56