Where the Wild Horses Are: "Hide your Eyes"

The Art of Maurice Sendak, by Selma G Lanes (Abradale Press/Harry N. Abrams, Inc. 1980) is great to look at and even better to read. Thoroughly entertaining and full of knowledge, detail and analysis, it is more than highly recommendable.

But this is not a review of the book. I just wanted to share one of the most fascinating things it contains. Every time I browse through the book and come across it it feels like discovering it for the first time. 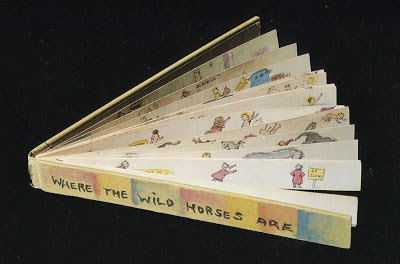 "The original fantasy for Where the Wild Things Are", Lanes tells us, "had been set down in November 1955, when Sendak completed a long, thin, horizontal dummy which he titled "Where the Wild Horses Are". (Click on each of the images to see them larger).

Lanes also includes Sendak's first draft of a text for what would eventually become Where the Wild Things Are:

Once a boy asked where the wild horses are.
Nobody could tell him.
So he asked himself where the wild horses are.
And he answered, they must be this way.
Luckily the way led through his own room.
He found signs pointing in the right direction.
Soon his room was the beginning of a forest. The rug on his floor was the grassy path into the forest. The boy followed the path into the very middle of the forest and then lost his way.
He entered a magic garden though the sign said do not enter, and looked round the tree though the sign said do not look. He thought this might be the place where the wild horses are.
Someone appeared and said stay with me, I am your mother. That cannot be, said the boy, you do not look like my mother, and besides my mother is home waiting for me.
With a growl the make-believe mother turned into a terrible wolf and chased the boy out of the magic garden, through the forest...
In a moment the boy grew to an old man and frightened the wolf away. I am now an old man, said the boy, and I have still not come to where the wild horses are. And besides, I am tired.

Lanes quotes Sendak on how the horses became monsters:

"I couldn't really draw horses. And I didn't, for the longest time, know what to use as a substitute. I tried lots of different animals in the title, but they just didn't sound right. Finally I lit on things. But what would "things" look like? I wanted my wild things to be frightening. But why? It was probably at this point that I remembered how I detested my Brooklyn relatives as a small child. They came almost every Sunday. My mother always cooked for them, and, as I saw it, they were eating up all our food. We had to wear good clothes for these aunts, uncles, and assorted cousins, and ugly plastic covers were put over furniture. About the relatives themselves, I remember how inept they were at making small talk with children. There you'd be, sitting on a kitchen chair, totally helpless, while they cooed over you and pinched your cheeks. Or they'd lean way over with their bad teeth and hairy noses, and say something threatening like "You're so cute I could eat you up." And I knew if my mother didn't hurry up with the cooking, they probably would. So, on one level at least, you could say the wild things are Jewish relatives."

Witty anecdotes aside, this elongated, cinematographic dummy and this draft text are a fantastic insight into the creative process behind one of the most mesmerising picture books ever published.

All images and quotes taken from: 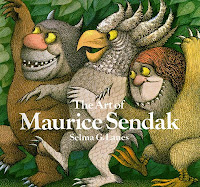 Email ThisBlogThis!Share to TwitterShare to FacebookShare to Pinterest
Labels: Sendak, Where the Wild Things Are