I Want My Hat Back: Don't ask me any more questions.

I Want my Hat Back by Jon Klassen
Walker Books, 2011 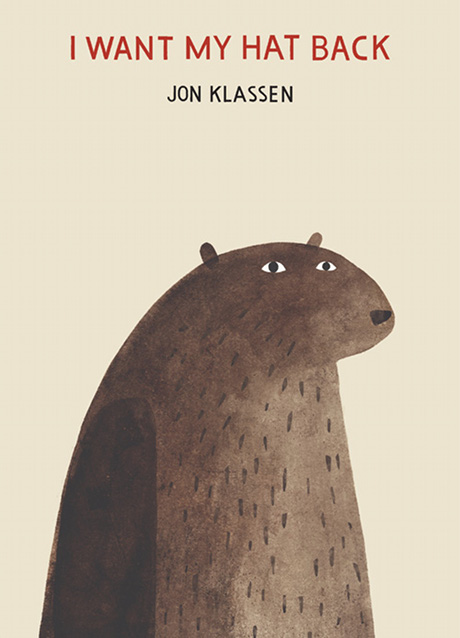 The first book both written and illustrated by Jon Klassen, I Want my Hat Back is a debut that makes you roar for more.

I Want my Hat Back has a cumulative structure, with repetition and mirrored dialogue for read-aloud enjoyment, using tension and timing masterfully for narrative -and comic- effect.

It is a delightfully naughty and subtle story told in deceptively simple dialogue and illustrations that captivates small and big readers on many different levels. It has lots of thank yous, some rather pathetic lying, one painfully slow brain or two, a double-paged anticipation of a true Western showdown, and a refreshingly pitiless, rather amusing, ending.

A big, cuddly forlorn bear has lost his hat and wants it back. He wanders about asking all the other animals he encounters whether they've seen it. The fox and the frog are concise and to the point: they haven't seen it. The rabbit (we readers notice he's wearing a lovely pointed red hat himself) is more lengthy in his explanation: "No. Why are you asking me. I havent' seen it. I haven´t seen any hats anywhere. I would not steal a hat. Don't ask me any more questions". The bear thanks them each anyway and walks on. The tortoise hasn't seen it but can do with some help climbing a rock. The snake once saw a blue and round hat, but that's not the hat our friend is looking for. The armadillo doesn't even know what a hat is.

Depressed, he lies down and looks up at the sky. "My poor hat. I miss it so much". Then the deer appears and asks him what his hat looks like. As soon as the bear starts describing the hat he remembers where he's seen it, or rather, who he has seen it on. He jumps up and runs back past all the animals, now standing in a neat line next to each other, until he reaches the thief and recovers his hat. "I love my hat".

An ellipsis gives us the full story, though, and when a squirrel comes and asks the happy, hat-wearing bear whether he has seen a rabbit wearing a  hat, the bear answers in a familiar fashion: "No. Why are you asking me. I haven't seen him. I haven't seen any rabbits anywhere....".

The Illustrations
The illustrations in I Want my Hat Back are simple-lined figures on a pale background with at most a few leaves and weeds as props. It is all told in muted colours (shades of grey. brown and beige), except for the red of the hat, which stands out from everything else in the images and is given clever narrative use.

An interesting visual element is the text, colour coded by character (the animals each speak in a different colour).

We love the expression in the bear's eyes. How can such deadpan illustrations convey such despair?

The endpapers, featuring all the book's characters including a hatless bear at the front of the book and a hattted bear at the back, look like gorgeous silky fabric. I wonder who will be the first to produce it for funky children's bedrooms!


I Want My Hat Back's cumulative text with repeated dialogue structures makes for great read aloud material, even for very young children, who will also be captivated by the expressive eyes of the bear and the funny looks of the other animals. There's also plenty of occasion for doing silly voices.

But I think this book offers many other powerful reasons for children to engage.


Small children can really identify with a) losing something precious and desperately needing it back, b) finding something nice and wanting to keep it to the extent that you c) try to cover up by lying badly and often verbosely, d) finding the rat who stole your precious something in a) and e) taking it back rather forcefully: "It's MINE". (Or as the bear says, "I like my hat").

I think it is this multi-layered identification that makes children oooh! and aaah! and giggle here, and, at least in our case, we get plenty of the three!

Other comments about I Want my Hat Back

It's the closest I've seen a picture book get to a silent film.

On the one hand, I Want My Hat Back is an introduction to a slightly more sophisticated type of humour than one normally finds in picture books, where double meanings play a key role and the funniness lies in showing and saying something different from what is happening. I've read a few reviews of this book, some off them well argued and interesting  that pose the question as to whether this might be a case of a book that is in fact far more appealing to adults than to children, a book that adults "get" far more than children.

So what is my experience? Do children "get" it? I find, at least in my son, that he has shown a peculiar kind of attraction to the way the story is told, to the mystery and the suspense that forms part of the humour in the book, that I hadn't seen before. I'd venture to say that it's the beginning of an education in humour. Slapstick you do not need to learn, but there is another type of humour that does need to be learned, and the way of learning it is through exposure to it. You might not get it at first, or you might not think there is anything to get (so what?), but the exposure to the playfulness of language and narrative for humourous effect is the beginning of an interesting and joyful learning process. My three-year old son was definitely drawn to it from the first time we read it a few months ago now. Would I say he is drawn to it because of the humour? It would probably be truer to say that many more elements are responsible for him liking it, but definitely, the use of narrative suspense for comic effect works for him, and manages to make him giggle.

Now I'll ask you a question. I think this dim little chap is an armadillo, but other people seem to think it's an opposum or a mole. What do you think? (Note added later: I see Klassen himself describes it as a "mole... thing". But those stripes still throw me...). 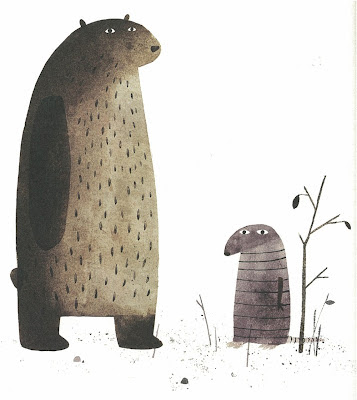 I see Jon Klassen's next book is due out on October 12. It features a fish wearing a Magritte-style bowler hat and is called, yes, you got it, This is Not my Hat.


Read this super interview with Klassen at Seven Impossible Things Before Breakfast. I have to say I jumped at his boyish face! Somehow I expected him to be/look older.

(c) of all the illustrations in this post, Jon Klassen, 2011.
(c) of the text, Ellen Duthie. By all means, copy or reproduce it, but please be nice and cite your source (author and site).
Posted by E. Duthie at 11:31