A Sick Day for Amos McGee: Look at those faces!

Click on the cover to listen to the way we read A Sick Day for Amos McGee.


A Sick Day for Amos McGee is a labour of love. It oozes painstaking effort, remarkable talent and a contagious enjoyment of life. It's the kind of thing that makes you feel grateful that there are still people out there prepared to undertake this kind of carefully slow-cooked project. Thank you!

In A Sick Day for Amos McGee, Erin Stead's exquisitely pencil-drawn faces and use of colour bring zookeeper Amos, his animal friends and their story to life. It is a charming story about companionship and learning kindness through imitation, with several visual subplots involving the sock-wearing penguin and a red balloon, and a sort of parallel life for small animals including their own miniature bus-stop, with plenty more details to enjoy again and again and again and again.

The Story
Sweet zookeeper Amos McGee gets up very early every morning and, after his oatmeal and tea, gets on the number five bus to start a busy day's work at the zoo. However busy he may be though, he always makes time to play chess with the elephant, let the tortoise beat him at a race, sit quietly with the shy penguin, wipe the allergic rhinoceros's nose and read to an owl who is as fond of stories as he is afraid of the dark.

One day, Amos awakes to find he is ill and cannot make it to work. The animals wonder where their friend is and eventually decide to take the bus to Amos's house and look after him for a change, playing chess, keeping his feet warm while he naps and wiping his nose until he starts feeling better.

Then the owl reads a bedtime story, and they all huddle together and go to sleep.

The Illustrations
The illustrations in A Sick Day for Amos McGee are pencil drawings on coloured woodblock prints. The grey of the pencil provides definition and depth, while the soft colours pressed from the woodblocks provide warmth and texture. Click here for a fascinating account of how Erin Stead works.

We are particularly fond of the sparing use of colour and -this includes my son- the choice of colours (green for Amos's clothes -in bed and out-, blue for his house, the bus, his blanket and his cooker, red -what a beautiful red!- for a balloon that almost becomes one of the characters in the book, the rhino's scarf and the owl's book-, yellow for the wallpaper, brown for the owl, and what I could only describe as "elephant colour" and "rhino colour").

The animals are anthropomorphic and realistic at the same time. Erin Stead's faces and eyes are incredible. She manages to make all her characters intelligent. You look into the elephant's eyes and try to guess what he's thinking, never whether he is thinking. Even the penguin is expressive!

These are some of our favourite illustrations from A Sick Day for Amos McGee.

Here is Amos "ambling out the door", with a bird walking in the opposite direction carrying a book under its wing and a mouse to the left waiting for the bus by a miniature bus-stop. See what I mean about the use of colour?

Here is Amos keeping the shy penguin company, all four feet turned in, with more penguins in the background, one of them wearing a rubber ring. 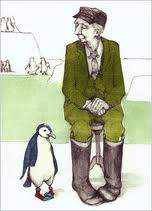 Here is Amos playing chess with the elephant: 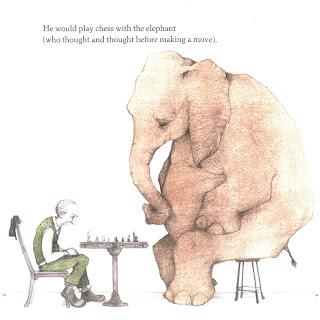 And Amos wiping the rhinoceros's nose: 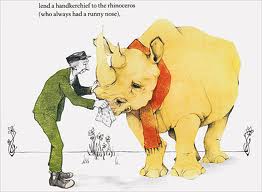 And the animals waiting for the bus:

We like them all so much, I could just reproduce them all, but I recommend actually getting yourselves a copy to see them and feel them (the book is also beautifully produced, with endpapers in a gorgeous soft grey blue, matching the mood of the book perfectly, and great quality paper and print).

Other things we like about the illustrations are just how many times Amos changes his footwear. We see his silly rabbit slippers when he gets out his bed, his stripey socks when he's making his breakfast, his boots when he's walking to the bus stop, a pair of trainers he puts on specially for the race with the tortoise, and a pair of wellies when he's sitting with the penguin. My son loves pointing them all out. And while we are on footwear, we have the penguin's bright red socks, which are also a big hit.

Amos's teddy bear also appears in several of the illustrations, like a silent onlooker, who might just say something when we least expect him too.

There is a mouse and a bird who also appear throughout the story, sometimes just watching, other times helping or even chatting among themselves.

And there's the strikingly red balloon the penguin becomes attached to a bit like a security blanket, which ends up floating away in the distance with the penguin looking on, while the rest of the animals sleep.

Although you know that every single line, every single detail in each of Erin Stead's illustrations is deliberate, she manages to make it all feel fortuitiously free, fresh, warm and alive.

A Sick Day for Amos McGee is a great bedtime story, with a long string of good nights, before all the animals huddle together into a big pack of friends to sleep at the end. We read it at all sorts of other times too, though. It was a hit with my two-year old son from the very first time we read it (it sometimes takes a few readings for him to really get into a book).

It's a pleasant book to read out loud, with a few particularly nice phrases. I like the way "the sniffles, and the sneezes and the chills" sound. And the elephant "arranging his pawns and polishing his castles".

It's a book where looking at the illustrations is at least half of the story. So there is normally rather a lot of -welcome- interruption from a two-year old. There are also two wonderful double page spreads with no text -the illustrations where the animals are waiting for the bus and when they are actually on the bus-, where we normally ask my son what the animals are doing and where they are going, like in the recording:


And, of course, the joining in with Amos: "Hooray! My good friends are here!".

My son has also started imitating what the animals and Amos do for each other. So he'll occasionally leap up and get a handkerchief and help me blow my nose, like Amos does for the rhinoceros.

He also invariably tickles Amos's feet in the scene where the penguin is keeping them warm for him and quite likes the teddy wrapped up in the elephant's trunk in the last scene, and the balloon flying off into the distance towards the moon.


I can imagine this lasting for a good few years as a read-aloud story, even after he has learnt to read it himself.


Other comments
It is refreshing and a reason to be thankful that A Sick day for Amos McGee manages to tell a story about friendship and kindness without falling into didacticism of any kind, showing that what is important is for the magic of the combination of the text and the illustrations to lead the child into the story and into the experience of delight for the sake of delight. If, on the side, your kids decide to wipe your nose or warm your feet, let them!


One last note. It feels as though the story was written purposefully as a generous gift to bring out the best of the illustrator's talent. Of course this might be influenced by the knowledge that the writer and illustrator are a married couple. But I'm always fond of a bit of a romantic backdrop. This book is sweet all round.

Note added Sept. 2011:
If you are interested in finding out more about Erin and Phillip Stead listen to this interview with them on From Scratch (NPR) by Jessica Harris, on July 29, 2011.

Note added November 2011:
And for real die-hard fans, you can get art prints from A Sick Day for Amos McGee here.