The Nutshell Library, by Maurice Sendak, 1962. HarperCollins. (Includes: Pierre, a cautionary tale in five chapters and a prologue; Chicken Soup with Rice, A Book of Months; One was Johnny, A Counting Book and Alligators all Around, An Alphabet). 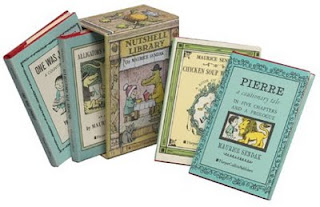 Listen to the way we read them:


The Nutshell Library is a collection of four miniature book gems that fit perfectly into little hands. Each of the four books that comprise it is also available in a larger format, but I think that misses part of the point as to why they are so much fun and why children take to them immediately.

We bought these for our son when he was about 21 months old and he has since had a full on love affair with all of them together and with each of them separately, in turns. His absolute favourite does seem to be Pierre though.

1. Pierre, a cautionary tale in five chapters and a prologue


Described on the miniature dust-jacket as 'A story with a moral air about Pierre, who learned to care', Pierre is basically the story of a little brat whose reply to anything he is asked or told is: 'I don't care!'. Even when his parents leave him at home and a lion comes along and looks him 'right in the eye and asks him if he'd like to die', Pierre answers "I don't care!". So the lion eats him.

Of course, all ends well, and eventually Pierre is shaken out of the lion in one piece by a doctor remarkably strong for his size.

Relieved that he isn't dead and wanting to be taken home, Pierre's answer to the lion's offer to give them a ride ('If you would care to climb on me, I'll take you there') is, to the great relief of his parents: 'Yes, indeed I care!!'. This delightfully playful short story in rhyme ends with a moral:

"The moral of Pierre is: CARE!"

Here are a couple of scenes from Pierre (don't you like the expression on his face?):


What we like about Pierre
Pierre's effortlessly musical rhythm really is something special. The repetion of "I don't care" throughout the rhymed poem has a powerful effect on how the mind focuses on the rest of the text, and somehow learns it after just a few readings. In fact, Pierre is the first book my son learnt 'by heart' (if you stopped, he would fill in the next word). What was most remarkable was how quickly this happened (within a few days). Reading other reviews and comments, this appears to be a common occurrence with Pierre (and with the other Nutshell Library books too). I suppose you might just call it catchy, except that catchy usually refers to the refrain or a particular part of a song or poem. This is the whole thing!

I also love the refreshingly casual, playful and unthreatening introduction of the subject of death, already mentioned above, with the lion asking Pierre whether he'd like to die, and suggesting it might be a way of not having to put up with his parents.


And then, at the end, when the lion gives "a roar and Pierre falls out upon the floor":

"He rubbed his eyes
and scratched his head
and laughed
because he wasn't dead".


I especially like the way Pierre gives brats a loving literary slap.


2. Chicken Soup with Rice, A Book of Months 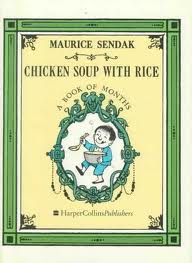 'Each month is gay
each season nice,
when eating
chicken soup
with rice".

In this catchy, fun little ode to chicken soup with rice and its endless possibilities, a boy with an uncanny resemblance to Pierre takes us through a year of chicken-soup-with-rice madness, with a poem and illustration for each month of the year.

The scenes for each month include wonders such as sipping hot chicken soup with rice while slipping on the sliding ice, celebrating the boy's snowman's anniversary with "cake for him and soup for me", becoming "a robin lightly dressed" concocting soup inside his nest, pepping up some droopy roses with a drop of chicken soup (we love this one!), becoming a cooking pot cooking soup, riding a crocodile down the soupy Nile, becoming a whale and spouting hot soup and becoming a baubled bangled Christmas tree with soup bowls draped all over him.

Here are some of these great little scenes: 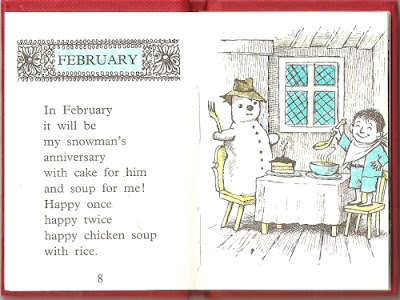 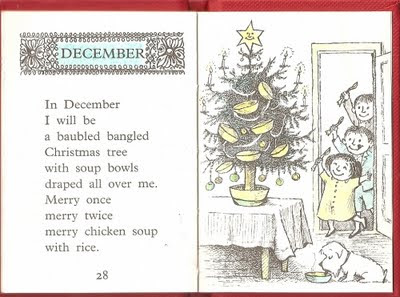 That refrain at the end is just so catchy!

What our son liked best from the beginning was the song-like nature of it, sometimes clapping in rhythm to the end refrain. Merry once (clap), merry twice (clap), merry chicken soup with rice (clap clap clap).

This is his second favourite, after Pierre.

3. Alligators all Around, An Alphabet

Described as "An Alligator jamboree with all letters - A through Z", Alligators all Around is one of the best alphabet books ever. For parents, it's worth it for the "Never Napping" illustration alone (unfortunately I cannot find it online and do not have a scanner at hand, but will try to do something about it soon!). For kids (including very young toddlers) it's delightfully catchy, easy and pleasurable to learn by heart.

Here are a few gems from this book: 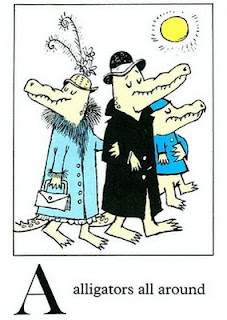 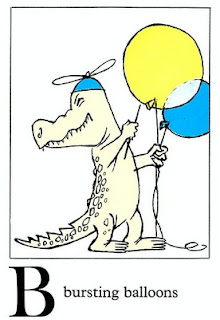 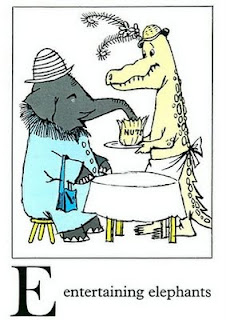 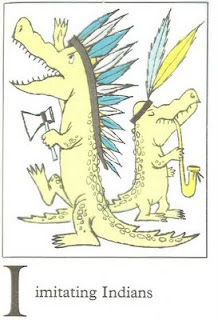 What we like about Alligators all Around
My son loves the "entertaining elephants" ("elephants!"), the Imitating Indians ("Ow ow ow ow ow!") and the Looking Like Lions ("Roaaar!").

We just love the whole thing!

4. One was Johnny, A Counting Book

"One was Johnny - but that's not all,
count the others who came to call."

One was Johnny is a rather special counting book, in that it counts not only forwards but also backwards.

The first page features Johnny, another Pierre look-alike, sitting quietly and happily at home reading a book. On page two, a rat interrupts the peaceful scene:


1 was Johnny who lived by himself,
2 was a rat who jumped on his shelf.

"Here's what I'll do - I'll start to count backwards and when I am through -if this house isn't empty, I'll eat all of you!!!".

And they all leave, one by one, until Johnny is finally alone again (at last!), and can go back to reading his book.

Here are some of our favourite illustrations from One was Johnny:


What we like about One was Johnny
We like a character who enjoys being on his own, reading quietly in a corner, and the fact that not even the most extravagant of visitors is able to distract him from his wish to continue reading.

My son says bye-bye to each of the characters who leave during the countdown, waving and saying "bye-bye" to them all, except to the blackbird who flies off to Havana, whom he says "¡adiós!" to, in a funny Cuban accent. His father's doing, I'm sure.


Reading them out loud

All four of these books are a real pleasure to read out loud and -judging by the extended period during which The Nutshell Library was a non-negotiable part of bedtime for our son- something rather special to listen to too. These two factors do not always come together -some books might be good but do not withstand more than sixty consecutive nights of reading, at least from the adult reader's point of view-, and when they do happen to coincide, it feels almost exhilarating.

The fact that they are all so catchy and kids learn them by heart after just a few readings, make them particularly enjoyable for them, allowing them to take an active part in the reading from a very young age and to continue enjoying them until they are about 10. They are fun on so many different levels!

It is quite striking just how divorced US and European children's worlds are (used to be?). Neither my husband (despite a wonderful adaptation by Gloria Fuertes having been published in Spain in 1977) nor I had heard of this great little collection before. Ask anyone of our generation and background brought up in the US, though, and they are likely to be overcome by a wave of nostalgia and perhaps break out and start singing the rhymes to the tune of Carole King's 1975 hits from the musical Really Rosie -written by Sendak himself and partly based on these four little books-, or at the very least have a fond recollection of the half-hour animated TV special directed by Sendak, also with Carole King's music.

We only discovered the animated versions and the Carole King songs a few days ago, when I was doing some research for this post, so our readings of them up until now -listen to the recordings-, have been "untainted" by these other versions.

Take a look at the animated version of Pierre from the show aired on CBS TV, with music by Carole King (available on iTunes and spotify too -the name of the album is Really Rosie and contains songs to all four of the books in the collection). It's not great quality but it's the best I could find:

Enjoy, and please do care!It was fascinating showing this to my son the other day and seeing him absolutely transfixed to start with and then breaking out into an uncontrollable giggle: "Pierre!"

(c) Copyright of all the illustrations in this post, Maurice Sendak, 1962.
More reviews and readings of books by Maurice Sendak on We Read it Like This:
Where the Wild Things Are