In the Night Kitchen: Stir it! Scrape it! Make it! Bake it!

Click above to listen to our special reading, with music, of In the Night Kitchen. You can read more about this recording here.

It's hard not to be enthusiastic about Maurice Sendak's elastically rhythmic, delightfully rolling and visually lingering In the Night Kitchen. In Spanish the word redondo -round- can be used to mean perfect. And The Night Kitchen is as round as you get.


In our case at least, this enthusiastic reaction was immediate from adults and child alike. We got this for our son before he was two and it has been a favourite with him (and us) ever since. It has never once gone out of favour (other books of his have periods of glory followed by periods of ostracism before usually returning to glory, depending on shifting moods and interests and a natural attraction to the pile of newly arrived books).

The Story
In the Night Kitchen is an account of a little boy's dream. Mickey falls from his bed through the dark, out of his clothes and into a huge bowl of batter in a noisy night kitchen where three fat Oliver Hardy faced bakers mistake him for milk, mix him in batter and pop him in the oven to bake him into a 'Mickey cake'. But half way through the process, Mickey pokes out, now wearing a dough pilot suit and points out their mistake ('I'm not the milk and the milk's not me! I'm Mickey!'), before jumping onto some bread dough, molding it into a plane and taking off, leaving the bakers below shouting desperately for milk for the morning cake. He flies up and up and over a stunning New York cityscape with food packages and containers for buildings, and reaches the top of a huge bottle of milk, dives down into it, comes up again with a jug full and pours it down into the massive bowl held by the expectant chanting bakers below. Then Mickey gives a triumphant cock-a-doodle-doo and slides back down and straight into bed, "cakefree and dried".

'And that's why, thanks to Mickey, we all have cake in the morning.'

We love the perfectly illogical logic of dream captured here, with the floating and falling and then rising up only to drift down again and back into deep sleep at the end. So satisfyingly circular.

The Illustrations
The gorgeous deep blue of the artificially lit starry night sky of In the Night Kitchen plays a prominent visual role in the book, setting a definite mood of city night-time excitement, the kind we might have imagined as a child and might still imagine as an adult goes on without us while we sleep.

Sendak's nostalgic pen & ink and watercolour illustrations for In the Night Kitchen come in comic-like panels of varying sizes, with speach bubbles and text boxes, and plenty and plenty of little details to pore over again and again and again.

Here are a few of our favourite scenes from In the Night Kitchen:

Sendak included many many homages and tributes in In the Night Kitchen, some big some small, some evident and others less, some entirely private and others more public.

The style and design of the pages are a straight-out tribute to Winsor McCay's wonderfully surreal comic strips Little Nemo in Slumberland, which often start off with Nemo in bed, always end with Nemo back in bed and involve plenty of falling, flying and floating, with food he's eaten (doughnuts, mince pies, raisin cake, sardines) sometimes being blamed for his dreams.

The bakers are Oliver Hardy ("I couldn't use Laurel cause I couldn't use a skinny guy", says Sendak in the documentary Tell Them Anything you Want), but they are also the bakers of a childhood advert that inspired the idea for In the Night Kitchen, with its slogan "We bake while you sleep". I didn't find that advert in particular, but here are the chubby chaps themselves in another piece: 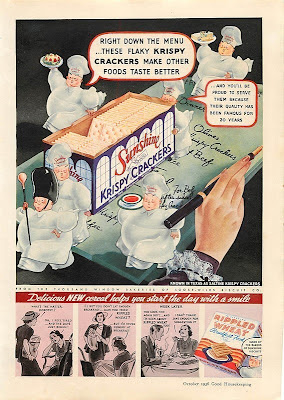 And they are also a bit Hitlerian with their moustaches and their ovens. And perhaps a bit witchlike with their big bowl/cauldron?

Another fun thing about the illustrations is looking at all the names on the tin, bottle and jar buildings, where Sendak included references to products in his childhood home pantry.

But the main thing about these illustrations is their vibrancy and the powerful imagery they contain. They are the kind of images that stay with you forever. And as I said at the start of this section, I think the night-time light has a lot to do with why this book draws you in so much. You can almost feel the noise in the quiet. And you are part of it while it lasts. Zzzz.

Reading it aloud
In the Night Kitchen is one of the best books to read aloud I have ever had the pleasure of coming across.

There is something about Sendak's opening lines (Where the Wild Things Are and Outside Over There, are two other examples of extraordinary opening sentences) about the delightfully free and restrained rhyme and rhythm obtained to a great extent by breaking every convention of rhythm in the book, by stretching sentences over pages and losing you for a second only to come back and take you reassuringly by the hand to the satisfying return to the rhythm broken. Ahh. Ok, I like it:

'Did you ever hear of Mickey, how he heard a racket in the night and shouted 'Quiet down there!' and fell through the dark, out of his clothes, past the moon and his Mama and Papa sleeping tight, into the light of the night kitchen?'

In the Night Kitchen also has a rambunctious chanty theme to it. What's so marvellous about Sendak here is that it's almost as if he gives you the tune with his language and rhythm. We sing it like in the recording. I'm sure other people might sing it slightly differently, but I doubt whether anyone had to think much about how one might sing it. It flows naturally. 'Milk in the batter! Milk in the batter! Stir it! Scrape it! Make it! Bake it!'

If we add to the chanting, Mickey's occasional outbreaks:
'Quiet down there!'
'I'm not the milk and the milk's not me! I'm Mickey!'
'What's all the fuss? I'm Mickey the pilot! I get milk the Mickey way!'

And of course,
'Cock-a-doodle-doo!'

You can imagine there's a fair bit of joining in here.

My son and all other children I have read it to have all found it great fun and started joining in from the very first reading. ('Milk in the batter!' appears enough times for them to catch onto it straight away).

Another favourite part is: 'But right in the middle of the steaming and the making and the smelling and the baking (my son always adds "and the eating" and thinks it's hilarious), Mickey poked through...".

And one other thing that adds to the rhythm of the text very interestingly is the little sound effects and secondary exclamations inserted in the illustrations (Thump, dump, clump, lump, bump, oh!, aah! ooh, Mama! Papa! Yawn, Oh!, Ho, hum, Yum!) which you can either choose to read inserted in the text or not, but they work marvellously well when you do:

'Did you ever hear of Mickey [thump], how he heard a racket in the night [dump, clump, lump] and shouted 'Quiet down there!' [bump] and fell through the dark [oh!], out of his clothes [aah!], past the moon [ooh] and his Mama and Papa sleeping tight [Mama! Papa!], into the light of the night kitchen?'


Other comments about In the Night Kitchen
We love how the potential horror of a little boy being baked in an oven is framed matter-of-factly -is it even fun?- and how Mickey himself saves himself from his fate by taking control and molding dough and dream to suit his desires and remove his fears.

I have purposely decided not to go into the ridiculous repeated banning of In the Night Kitchen because I don't really have much to add to Sendak's comment: 'Mickey has a penis. Gevalt! Who would have thought such a thing could happen to a child?'

For a final treat, I had originally included a link to youtube featuring the excellent short film In the Night Kitchen made by Gene Deitch and narrated by Peter Schickele in 1987, but it seems to have been removed from there and from every other source where it was once available. Sniff sniff. I shall keep looking and include a link if I find one.

(c) of all the illustrations in this post, Maurice Sendak, 1970.
(c) of the text in this post, Ellen Duthie, 2012. You may copy this or reproduce it, but please be nice and credit the author and the site.

More reviews and readings of books by Maurice Sendak on We Read it Like This:

Did you ever hear of Sendak, how he wrote the best books for children and shouted 'Quiet up there!'

Where the Wild Things Are

Special Christmas Reading of In the Night Kitchen, with music and three voices!
Posted by E. Duthie at 16:17